The starting point was a space, a huge recently created plaza. It’s one of these very clean new public spaces, part square, part cut-through, a place to eat your lunch, film your skateboarding moves and appear on CCTV.

I think the plaza is supposed to have a cultural purpose – it’s outside the new Canada Water Library and was created when the upturned pyramidical ziggurat that is the library was built. Anyway we thought the space needed to be tried out as a performance arena.

So we mustered our participants, briefed their leaders, took photos of the challenge and decided on a theme and process. Surrounding the plaza is a lake, a library, a block of flats and a transport hub. Beyond the lake lies the Surrey Quays shopping mall. As a result the space is inhabited by groups of children, shoppers, commuters and ducks. The theme would be Flocks. Or Swarms. Or perhaps Gaggles.

We asked each of the groups (there were 6 different troupes involved) to create a flock. And then we filmed them, and passed it on to another group for development. The 6-8’s originated a flock of parents – worrying, tired, hurrying. The 9-12’s originally came up with a gaggle of elders, then when the elders accused them of ageism they invented an outing of pupils who mutated into ducks. The teenagers created a wolf-teen hybrid, hunting in packs, isolating the weak, feral and worrying. Our adult groups came up with a number of swarms – a Ponderation of Ponderers who ruminated and basked, a flock of newspaper reading Herons, and groups of migrating commuters.

Once we had the offerings from the groups we shaped a gentle narrative. A Mother and her child are waiting in the plaza. The mother reads the Metro, the child plays on her phone. They don’t talk to each other or interact with their surrounds. They are joined by a boy who pays more attention. He is rewarded by seeing extraordinary things.

Soundscapes to underscore the flocks were composed by Richard Flanagan. John Macnaughton played delicate alto sax over the top accompanying the perspective of the boy.

It was a wet summer. Moving the performance from the confines of the rehearsal room to the great outdoors was tricky. On the Sunday before the performance we got very wet. The Teenagers rehearsed on in the rain, sodden dripping wolves. But on the night the sun shone and the audience arrived in their droves.

An audience of 300 watched a cast of 94 animate the vast hard plaza with patterned movements inspired by the herds of animal urbanites who pass through Canada Water. 26 minutes of performance, slightly ritual, abstract, occasionally narrative. The last moments seeing a huge V of people wrapped in plastic flying in formation before they returned to imagined keyboards to communicate via computer and facebook. A short moment of community.

I think the work may have changed the feelings people have for the space. I think those that were present, including the flat dwellers who watched from their balconies may now have a playful memory that they will recall with a smile when they pass through the plaza. And for the Bubble community company, it’s another lesson learned about the sort of theatre we can make. 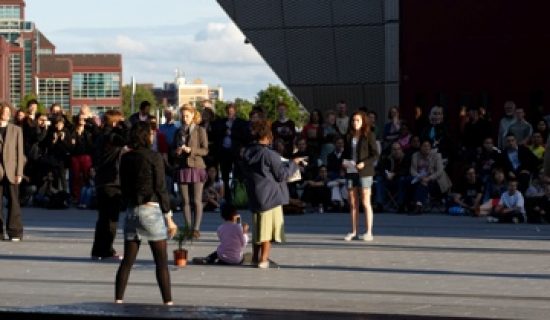