In honour of Black History Month (#BHM365), London Bubble Theatre brought together an exciting panel of theatre professionals to discuss why the theatre we have made in the past and continue to make today is so important in the age of Black Lives Matter.

Our awesome panel line up:

Bola’s first play GONE TOO FAR! was selected to be performed as part of the Young Writer Festival and was performed at the Royal Court Theatre (Upstairs) in February 2007. In 2008 the play won the Laurence Olivier Award for Outstanding Achievement in an Affiliated Theatre. The screenplay adaptation premiered at the London Film Festival in 2013 and was released in 2014. You can catch it now on Netflix. She has a sequel in development with Poisson Rouge. Bola’s writing has been presented by the ATC, Tiata Fahodzi, Hampstead Theatre, Soho Theatre, Young Vic, Talawa and Cardboard Citizens to name a few. Bola is currently under commission to Out of Joint Theatre Company.

Nadine is a PhD candidate undertaking research on black women playwrights in the Black Plays Archive. Nadine is the creator and co-host of That Black Theatre Podcast, which aims to share black theatre history to the public. Nadine also writes for the international film magazine, Sight & Sound.

David Gilbert is a director and theatre maker from Zimbabwe who’s worked with the top leading theatre’s in London over the past 5 years. David has a long term connection with London Bubble delivering on participatory groups and educational projects over the last 6 years.

Ifrah is Talawa’s New Work Producer and is responsible for nurturing and supporting the development of new and emerging theatre-makers. Prior to joining Talawa, Ifrah was Literary Assistant at The Bush Theatre, where she led on the Young Writers’ Group and produced showcases and R&D’s. Ifrah also freelances as a dramaturg and facilitator.

Omar Okai is Co-Director of the Black British Theatre Awards. He is also the Artistic Director of The Okai Collier Company for over 20 years. He has directed and choreographed internationally; France, Spain, Germany and Shanghai and of course Britain, over 90 productions, videos and documentary. He is also a an experienced performing arts teacher in dance and drama, an International Musical Theatre Examiner for Urdang International and in his own right, an accomplished west end performer.

Special thanks to our sponsor British Land. 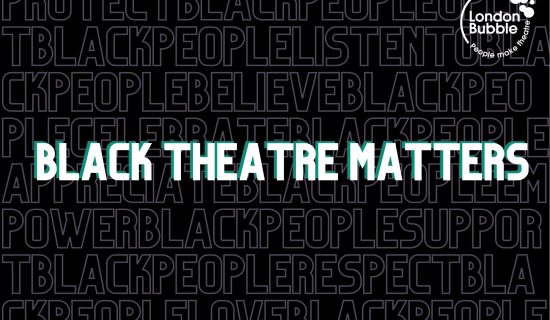