At this week’s Mayflower session, we explored lingering, unanswered questions and ideas the group has about how and why the voyage took place, and we whet our appetites on a possible script for the upcoming performance.

Warm-up began with a physical activity in pairs, where we began by shaking hands, then closing our eyes and stepping backward. The goal was to step forward with eyes still closed and find each other’s hands again to shake. As you can imagine, plenty of laughter ensued!

Next up, the group was asked to break off into teams of 4-6. Each team discussed what element or question around the Mayflower voyage stood out to them most strongly, and then using those ideas, create a living art piece. In my group, we all agreed we still wonder about the individual reasons passengers had for deciding to undertake such a radical life change, especially because we don’t have much in the way of those minute details of passengers’ lives – intangible elements like their personalities, opinions, priorities, worries and fears. To express that lack of knowledge we have around the voyage and its passengers’ reasons for getting on the boat, our ‘human sculpture’ was entitled, ‘WHY?’ and included kinetic movements and even sound. 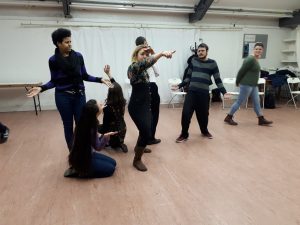 Lastly, the group did several spirited read-throughs of a brilliant piece of text written by another group member, Simon. While we have some kinks to work out, it was exciting to practice with a potential script and think about what our characters and performance could look like in 2020! 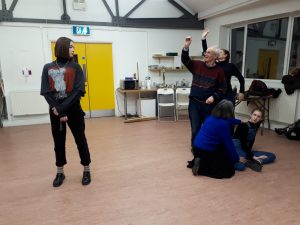 London Bubble would like to express our thanks to Paul Hamlyn Foundation for emergency support of the Speech Bubbles...

Thank you to Paul Hamlyn Foundation