This project has now ended. Watch a film about the project here

Following the resounding success of our Grandchildren of the Blitz project, between December 2014 and March 2016 London Bubble ran an intergenerational oral history and performance project which explored how the dropping of the first atomic bomb, on August 6, 1945, was reported in London and how the longer term response grew into the peace movement of the 1950’s and ‘60’s. 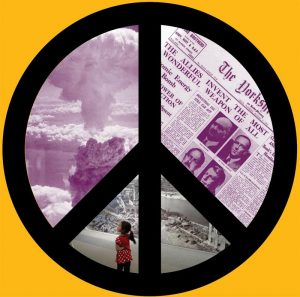 70 years after the world’s first atomic bomb was dropped on Hiroshima, After Hiroshima was a community oral history and performance project which was rooted in interviews with people about their reactions to this harrowing event in 1945 and their memories of the subsequent period during which the CND and peace movement was formed. The information that our team uncovered was creatively interpreted, turned into a script and performed in London as a means to commemorate the traumatic event.

Initial reports of the destruction caused by the bomb were censored but afterwards the full effects, including radiation sickness, became more widely known. In the UK, politicians, philosophers, scientists and church leaders united to campaign against nuclear weapons with peaceful protests, marches, music and artwork among the responses.

Between 2015 – 2016, our volunteer research team have learnt how people received the news of ‘the bomb’, what reaction came from people living in the UK and how families of British servicemen who had served in the Far East, or had been prisoners of war under the Japanese, felt at the time. The project examined the period up to October 1963 when an international Test Ban Treaty was signed by the United States, the UK and the then Soviet Union. The early days and protests by the peace movement have also been explored.

The testimonies and research have been gathered by a dedicated team of over two hundred volunteers and then disseminated through a series of prepping workshops, shared internally through a number of events and has formed the basis of a new script, by writer Sarah Woods, which was performed by an intergenerational, community group in March 2016 at Dilston Grove gallery in Southwark. The project has also formed the basis of training workshops and support pack for teachers. The archive of information uncovered will be shared with the Hiroshima Peace Museum. We are currently in the process of uploading the interview transcripts and research which you can access below.
This project formerly ran alongside Bubble’s Grandchildren of Hiroshima project, which saw local children in Hiroshima interview Hibakusha, or survivors of the atomic bomb. This project culminated in an intergenerational, community performance in Hiroshima & Tokyo in August 2015, to commemorate the 70th Anniversary of the Atomic bombing of Hiroshima. You can read more about the Grandchildren of Hiroshima project by clicking here.

After Hiroshima is supported by the Heritage Lottery Fund and Arts Council England.

After Hiroshima tells the story of the world’s first nuclear bomb and the UK response to that – both in terms of weapon development and protest, through the stories of those who were there.
The show was performed by a community cast of 50 people aged 6-80+

Copies of the DVD are now available to buy.  Please CLICK HERE.

The performance takes place at Dilston Grove, Southwark Park, London SE16 2DD (access is inside Southwark Park in the Southwest corner of the park). Dilston Grove is an accessible building.
To book your tickets please click here. (Link coming soon!) 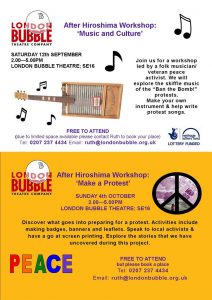 The Project Begins
The steering committee was appointed
December 2014

Digital Workshop Training
Two sessions over April and May 2015

Lantern Making Workshop
at Bubble. All were welcome
July 2015

Hiroshima Dispersed
6 August 2015
The 70th anniversary of the devastation of Hiroshima. To read more about how we marked the day please click here

‘Make a Protest!’ Workshop
Participants designed and screen printed their own protest banners and made their own badges
October 2015

In November 2015 London Bubble Theatre Company ran a free course designed for teachers in the logistics of running an oral history project within the school setting, for children. The course was open to upper primary and secondary teachers as well as teachers in training. The course was three sessions long, over a period of three weeks.
The course structure is as follows:

Please click the name of the interviewees below to take you to their full interview transcripts.

Interview with Hanneke Coates, who spent over three years of her childhood in a Japanese-run concentration camp in Indonesia.

Interview with Michael George who visited Hiroshima just four months after its destruction by the atomic bomb.

Interview with Ray Kemp, a local Rotherhithe resident who was serving in the South East Asia Command in Madras when he heard the news of the atomic bombing of Hiroshima and Nagasaki.

Interview with Annette Wallis who shares her personal experience of the Quaker perspective of nuclear disarmament.

Interview with Keith Quilter, a Second World War veteran who was on a submarine when he first heard the news of the atomic bombing of Hiroshima.

Interview with Walter Wolfgang, one of the organisers of the first Aldermaston March & now one of the current CND Vice-Presidents.

Interview with Rosalie Huzzard, an active member of the Women’s International League for Peace and Freedom (WILPF).

Interview with Malcolm Stern, long-time member of the CND & father of one of our cast members!

Interview with Carol Turner, who joined her local CND group whilst in secondary school & is now heavily involved with the Labour Party.

Interview with Kennette Benedict, Senior Adviser to the Bulletin of Atomic Scientists and served as Executive Director and Publisher until she retired in Feb. 2015.

Interview with Paul Schulte, Senior Research Fellow in the Centre for Defence Studies at King’s College London & one of the only people we spoke to who is committed to nuclear deterrence.

Interview (1)with John Mecklin, Editor of The Bulletin of Atomic Scientists.

Interview with Bo Jacobs, associate professor at the Hiroshima Peace Institute of Hiroshima City University, Japan speaking about his work on the Global Hibakusha project and other research.

Interview with Takako Barker, a Japanese-born peace activist who (amongst other things) who stands outside the Japanese Embassy in London every week protesting against the plans of the Japanese Government to change Article 9 of the Constitution which prevents Japan from maintaining or using any military force.

This material has been uncovered through research trips, undertaken by our volunteers, to the following places: the Peace Museum (Bradford), the Bradford University Archives, LSE University Library, the Imperial War Museum, the Science Museum and Southwark Local History Library. Our volunteers have also undertaken independent research into areas that interest them.
A lot of the research is visual and features some great graphic design of the nuclear disarmament movement during the ’50’s and ’60’s. Have a browse to find out more.

Our research, along with the interview transcripts, gets passed on to our writer, Sarah Woods, as well as explored during our Thursday evening intergenerational prepping workshops.

Here are some audio files for you to listen to:

How People Were Involved

After Hiroshima would not have been possible without the help of the 258 dedicated volunteers and participants that formed the team. Participants were at the heart of the project at every stage and had a major role in sculpting and directing it. They came to us from all walks of life.. some were local residents wanting to contribute to a community project, others were university students looking to develop new skills and others even lived abroad and were able to take part in the project through remotely transcribing interview for us.

Here are a number of ways that people were involved with the project but the list is not exhaustive. We aimed to tailor each opportunity to the individual to ensure if was a meaningful experience for both parties:

Singers
The choir was led by Fran Lobo and Katie Cooper. It was formed of 17 intergenerational singers of mixed abilities. Everyone was welcome, they didn’t need to be able to read sheet music or have any prior experience just enthusiasm.

Exhibition volunteers
A team of volunteers got together to discuss and interpret the research and interview transcripts. This resulted in our Front of House exhibition which focused on the Aldermaston Marches.

Story tellers
We interviewed 35 people about their immediate, and longer term, responses to the atomic bombing of Hiroshima and Nagasaki.

Record & transcribe interviews
A dedicated team of interviewers visited story tellers, all over the country, in their own homes to hear and record their testimony. These interviewes were then transcribed by a huge team of volunteers. It was a massive undertaking; we had approximately 60 hours of interviews and each hour of interview takes roughly 8 hours to transcribe!

Researchers
Our researchers used a wide range of mediums and sources (including archival material, newspapers, banners/propaganda, songs and music) to explore points of interest that came up in the interviews as well as the subject more widely. We went on research day-trips to the Peace Museum, the Bradford University peace archives, the Southwark Local History Library and the LSE archives. Other researchers worked independently from home. Some asked for subjects to research whilst others chose themes that interested them such as the role of women in the early nuclear disarmament movement.

Preppers
During a series of weekly workshops, an intergenerational group creatively explored and the research and testimonies collected throughout to see what could be brought to life theatrically; what worked and what didn’t? This process informed the script writing process. 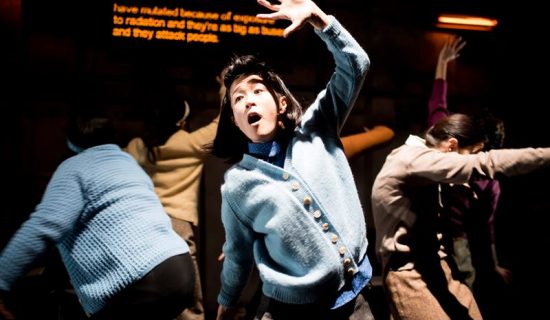 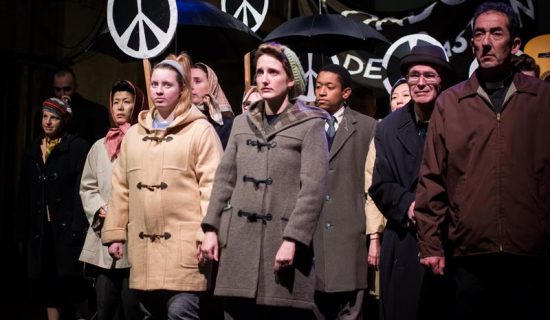 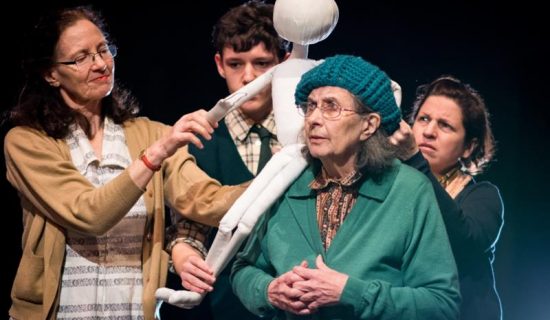 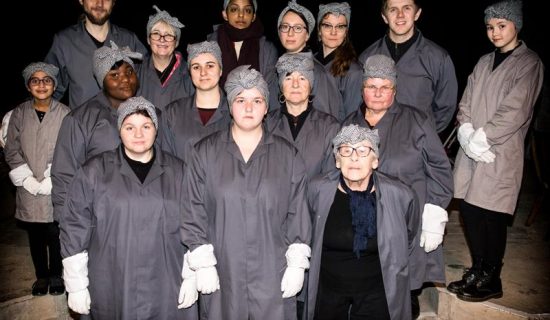