The Sirens of Titan

Bubble’s second Fan Made Theatre production, in the days before crowd funding, invited people to buy a ‘stake’ which allowed them to suggest what they wanted to see as our summer show and then vote on a shortlist.  The winning title was The Sirens of Titan.

This time travelling promenade took audiences from the ancient planet Earth (observed during that turbulent period between the second world war and the third great banking collapse) via Mars, to the underground caves of Mercury then on to our final destination the graceful plains of Titan.

Kurt Vonnegut wrote his classic space-comedy in 1959, foretelling the space race, the creation of synthetic life and  lovingly poking fun at our continual search for “the meaning of life, the universe and everything” (as his great admirer and fellow space hitch hiker Douglas Adams put it).

Tickets to Sirens of Titan included:

–   Entrance to the Rumfoord mansion to witness the materialisation (and de-materialisation) of William Niles Rumfoord and his Dog Kazak.
–   Space rations – including oxygen supplies in the form of Goofballs
–   A chance to stroke the Harmoniums of Mercury

And at no extra charge – standing back in awe as our actors attempted to say Chrono-Synclastic Infundibula. 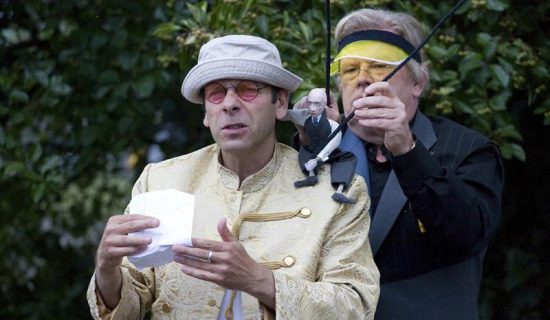