Blackbirds comes home to roost at the Pumphouse 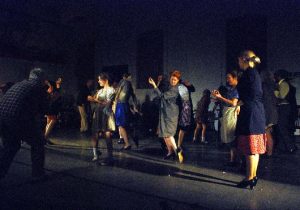 It’s been another very busy week for the Blackbirds team!

From last Tuesday the technical team were turning the Pumphouse Museum in Rotherhithe into a performance space for the show.  Lights were rigged, seating was arranged, tea was brewed and then the cast arrived on Wednesday evening to start rehearsals.

I think we all felt very priviledged to perform in a space which has such close physical and atmospheric links with the Blitz.  It’s been a long, varied and emotional journey so far.  Since the commemorative evening for the 1st night of the Blitz which we were involved with at Surrey Docks Farm in September 2010 and now to be back in the same area performing Blackbirds on Remembrance weekend 2011.

Thanks to everyone who came to support the show at the Pumphouse and to the cast, crew, creative team and volunteers for your endless enthusiasm and commitment to Grandchildren of the Blitz.

If you still haven’t seen the show yet your very LAST CHANCE will be in January.
Blackbirds will be coming to the new Canada Water Culture Space on 6th & 7th January 2012.
Get your tickets via www.londonbubble.org.uk or call us on 020 7237 1663

Back to Grandchildren of the Blitz

In 2011 London Bubble started making new theatre pieces with groups of volunteer performers of all ages and backgrounds. People...

An introduction to Vernacular Theatre