The Deal: An Interactive Research Performance

“Where shall we go? What country will have us?” In small clusters people are asked to choose a new home and place a token on a tapestry map of the world – the world as it was understood to be in 1618. Consulting the clusters are Separatists sometimes mistaken to be Puritans or mythologised as Pilgrims. One boy tentatively places his token on what will become known as New England. In another group, a woman is clear – “it’s not your country, you have no right to go there”. She has the benefit of 400 years of hindsight but did a Separatist argue that in Leiden in 1619? 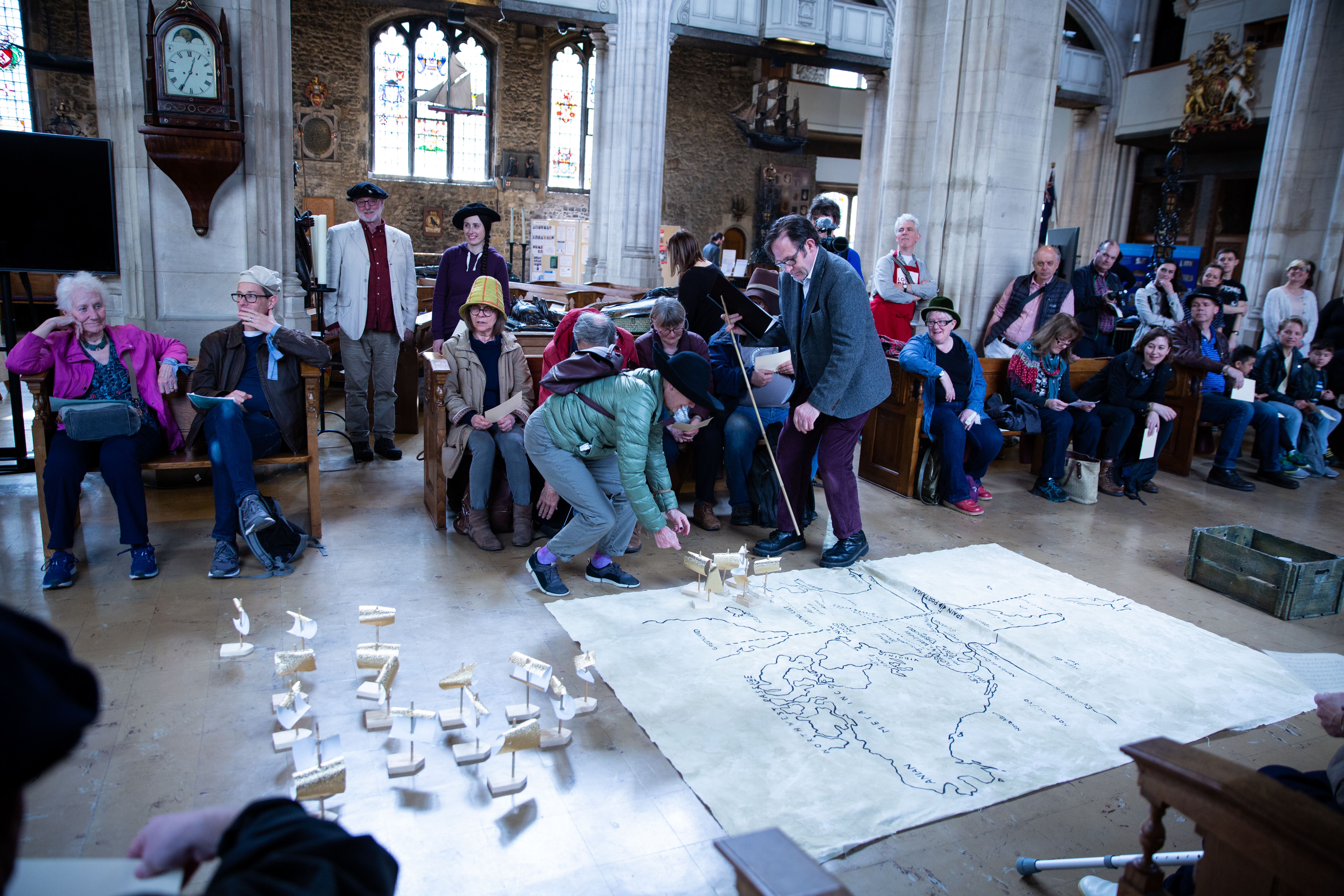 The conversation over the tapestry map was a moment involving the audience at our interactive research performance ‘The Deal’. Travelled between 3 churches in the City of London and invited people to make decisions both as passengers and investors. In the first church – known as the Dutch Church – 2 actors explained the plight of the Separatists, how they had fled to Holland but now needed to re-locate before the truce between Holland and Spain came to an end. Attenders were given wrist bands and a biography of a particular passenger. As songs from the period were performed by musicians a decision was made and a letter written to King James seeking permission to migrate. Two emissaries were chosen to carry the letter to London.

London Bubble at The Dutch Church

Accompanied by a hymn the audience travelled through the streets and alleyways of the capital stopping off at a ruined church to hear how the monarchy justified their colonisation of America by citing the stories of King Arthur who, in 530, had according the John Dee, claimed the continent for England.

Arriving at All Hallows by the Tower the audience were given a second identity, this time someone who had been key to the expansion of 16th century London – a merchant, explorer, writer, pirate or scientist. A more splendid map was used to trace the various attempts to colonise the New World and the singing of a Broadside Ballad – London’s Lotterie – told of the good of Virginia and wished fortune to all who ventured there.

Our emissaries delivered their letter to the King and then met with the directors of the Virginia Company – with the help of a dodgy investment broker (Thomas Weston) and the financial contribution of the audience (in the form of buttons) The Deal was done.

London Bubble x All Hallows by the Tower

Squeezed into the nave of All Hallows audience and performers celebrated with a dance known as The Fine Companions. This had been stepped in the city at the time of the Mayflower. A time when the King found it politic to look away, when Merchant Adventurers dipped into their capital and religious exiles took to the seas.

This delving into the mercantile and political background to the Mayflower with added music and participation allows people time to feel their way into the history. While the tone is light the form is engaging – and sometime quite moving – it’s often ridiculous and usually fun. The material and approach has been developed within weekly inter-generational workshops which Bubble has been running since early 2018. At the beginning the aim was simply to research and then share the story. But quite quickly workshops saw participants sharing their own stories of leavings, and talking about family moments of resistance or arrival. The focus has broadened – the significance of the history seems to have become clearer, the learning curve steeper.

To find out more about Charting the Mayflower click here.

We gathered in the rehearsal room, about 30 of us. Peth opened and welcomed and then I (Julia Voce, former...

Day 3: Evening of creativity, well being and open Bubble week