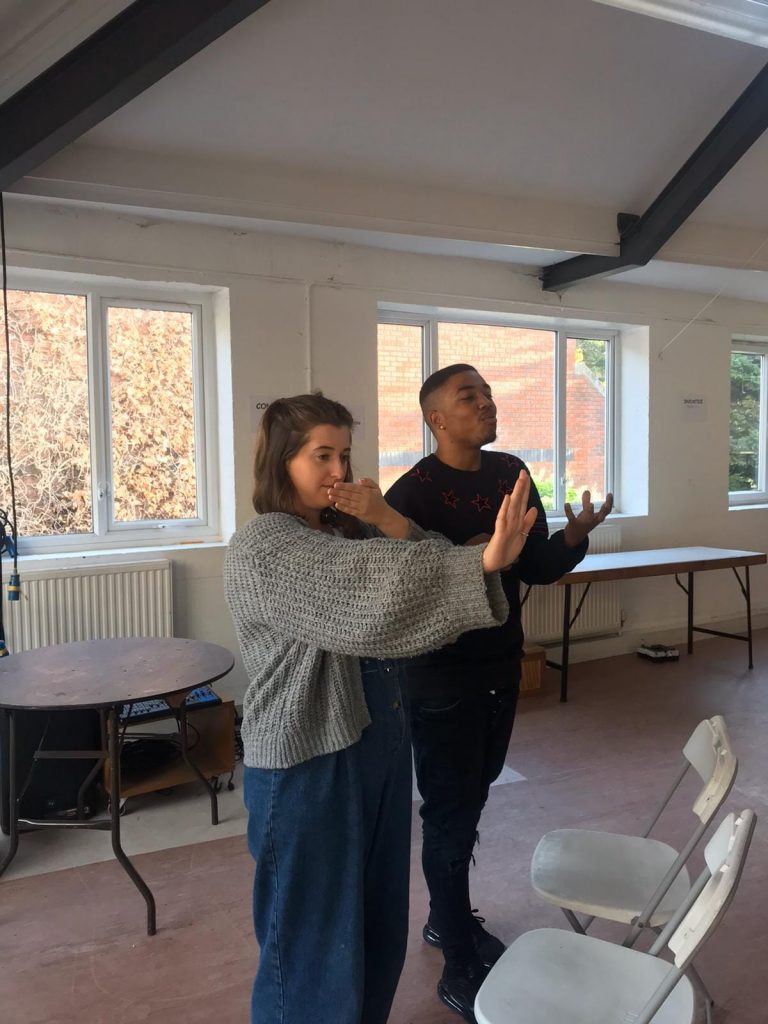 As we are now finishing week six (!!!), which is half way through this year’s Young Theatre Makers Programme, we wanted to give everyone an update on what we’ve been making so far! I’m Florrie, currently on placement with London Bubble, working closely with Marie Vickers (Project Leader, Young People’s Programmes), and I have been fully immersed into the Young Theatre Makers so thought it would be nice to share my experience so far.

Weeks one and two were all about getting to know each other as we knew we’d be spending lots of time working together in the coming weeks, so lots of name games were played – which is handy for those of us who are rubbish with names – competitive team games, and a few improv games got thrown in too. These weeks were super high energy and a great way for me to be introduced into Bubble’s way of life. Make sure you check out Alicia’s blog for more about these two weeks!

From here we began looking at the fundamentals of forum theatre, which as you may (or may not) know, is traditionally the style of the young theatre makers’ final show. This meant getting to know and understand the work of Augusto Boal, a political activist and theatre practitioner who created and developed Theatre of the Oppressed from which forum theatre comes. This week included lots of games taken from Boal, some were high energy and fun, whereas others were more introspective for the participants. We touched on themes like discrimination, pressure, control and oppression; all integral to forum theatre which seeks to expose oppression in people’s everyday lives and offer the spect-actors (audience) an opportunity to change this. As you can imagine, some of this was quite heavy so we always made sure to end the sessions with an uplifting game, one of our favourites humorously named ‘big booty’.

The next few weeks saw the YTMs working on devising skills using these themes as a stimulus, having conversations about how these manifest in their lives and issues they want to tackle. I loved getting involved with this and being part of conversations with – even in our small group – young people from such a wide variety of backgrounds and experiences.
During half term last week the building was busy with two youth programmes, our YTMs and a project funded by Children in Need for vulnerable teens in Southwark. We took the opportunity to spend an afternoon with these young people to share ideas and have conversations around what they feel are barriers for young people. Together we devised a few short scenes exploring classism, racism, drugs and cyber bullying. These scenes then helped us to focus on what young people are passionate about and from there we began developing the characters whose stories we want to tell in our piece.

This week has seen the YTMs working in two local schools, collaborating with the students to refine our characters, taking inspiration from what they feel needs to be talked about. When we tour we will return to these schools to perform and we hope they recognise how their input has influenced the piece!

Back to Young Theatre Makers: Blog

Working with Tea Break was such a rewarding, warm and wonderful experience.  As someone who works in theatre primarily with...