After over thirty years of service, our creative director Jonathan Petherbridge steps down today. As we transition into a (possibly different/in some ways the same) new normal Bubble, we are hopeful for the future whilst recognising that these are indeed some big shoes to fill. In celebration of Peth and all that he has meant and will continue to mean to Bubble, here is a special roundup of favourite moments over the years shared by Bubble staff, participants, board, friends, supporters, artists and freelancers old and new. Happy #FlashbackFriday Peth! And thanks for everything… 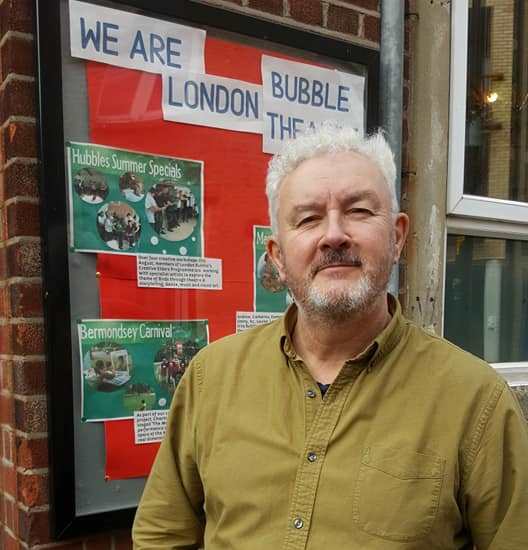 Bubble’s vernacular theatre usually takes place at a venue that has some significance for the project. Since From Docks to Desktops focused on Work, it was performed at an old biscuit factory where many of the project’s interviewees had once worked.  “This was a big moment,” recalls Marie, BYTM Project Lead. “Lots of local people huddled into The Biscuit Factory with the genius idea of actually baking biscuits throughout the show. The smell was amazing! I learnt a lot about local people, history and culture. And it was great to see some of our Young Theatre Makers helping out in the ‘kitchen’ too.”

The Odyssey was the first professional show that Bubble put on as an independent organisation. Arts Council funding has gone and Bubble was still standing.

I have one abiding, family-loved memory of the Bubble. As a parent, I really enjoyed seeing the productions with my two boys, who we were bringing up in South Bermondsey. A highlight was the annual panto which I remember being at Greenwich Theatre. One year, the dame, played by Simon, don’t remember his surname now, did a wonderful sketch about making pancakes which brought the house down.
It was about self raising flour. As he mixed the batter on stage, he added self raising flour and up from the bowl came a plastic flower. Both our boys collapsed laughing.  The next year, the one thing that they really looked forward to was the next panto. I think there may even have been a reprise for that joke.
When I came to the interview in 2018 to discuss being a trustee, there was that Simon. When asked why I wanted to be involved with the Bubble, I mentioned these trips to the panto, among other more lofty reasons for being a trustee. He said I was one of a select group of people in SE London who remembered him in that role. His other line that the boys liked at the time was, “I am just a sad old man in a dress”.
I liked that connection between life as a mother and life as a post full time work person, looking to contribute to the community. Peth was there in the room, and it was just a fun exchange generally. We still laugh about that most simple of tricks in our house.  Self raising flour is rarely taken out of the cupboard but when it is, this line comes to mind.” – Jane Stokes, Trustee 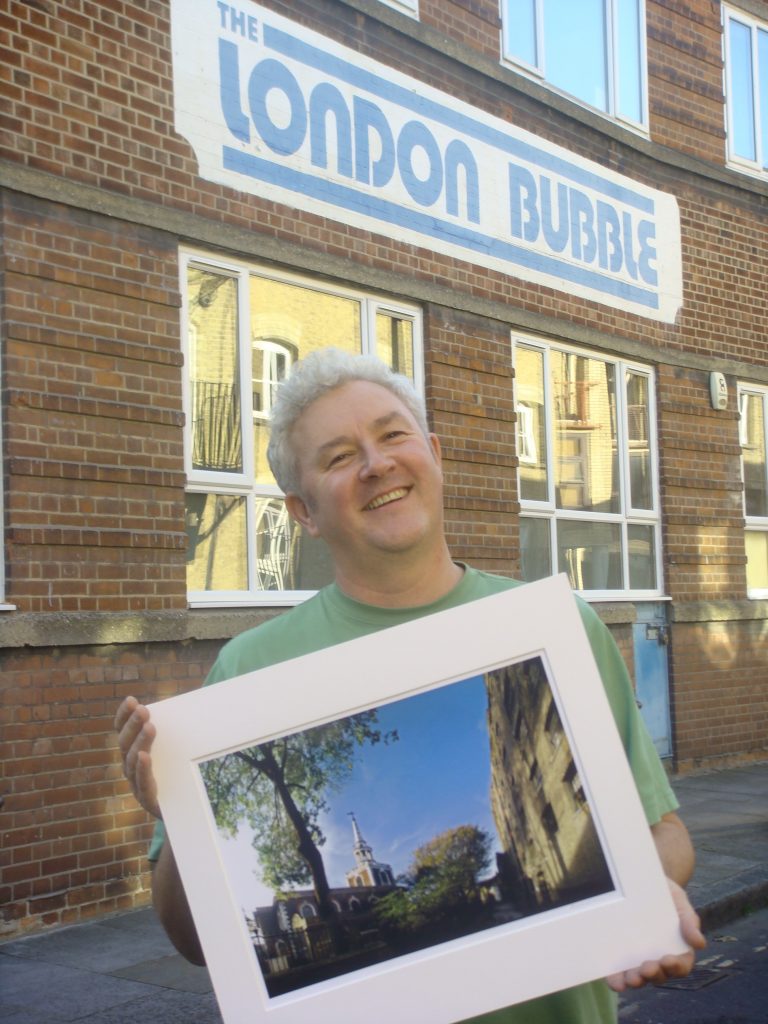 “All my memories of Peth seem to revolve round having a very stimulating drink or three – after a show, after a board meeting, whenever – though that possibly says more about me than about Peth. He was always bracing company. ” – Stuart Brand, former board member

This was the first public facing show after the funding cut which was testament to Bubble’s durability and impact. “It was also my and Mark’s first Bubble show!” shares Lucy, lead coordinator, who started her Bubble journey as a participant. 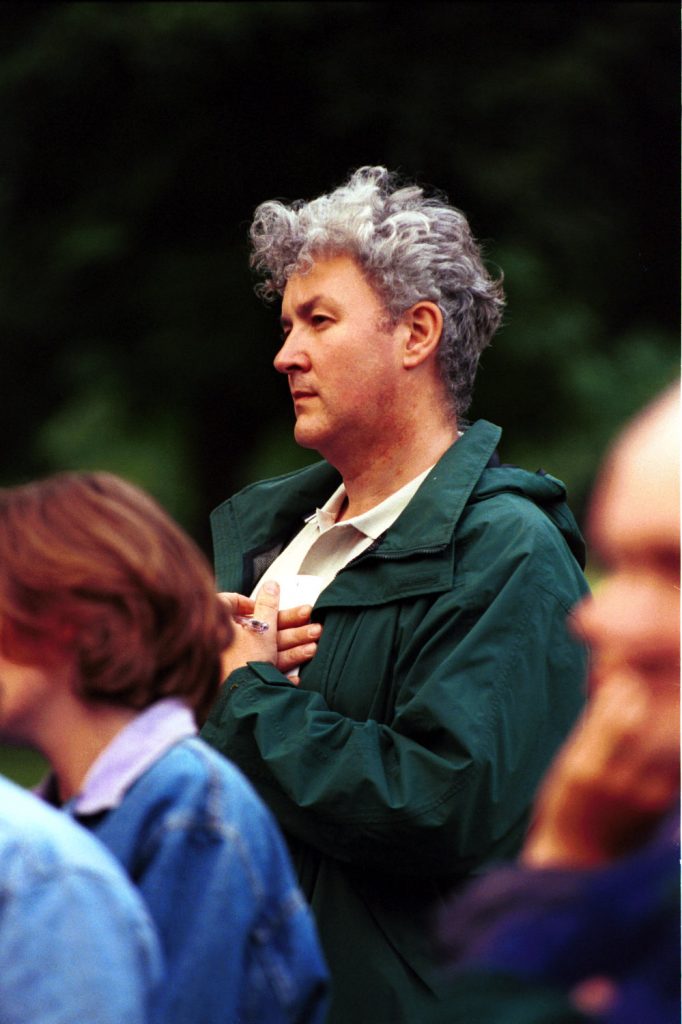 “Favourite Peth moment? That’s hard as I have been around the Bubble shows for a long time, whether I have designed them or not, or brought our sons to see shows, likewise. If I have to pick a particular memory, its maybe sharing a relaxing beer while watching the start of one of the summer promenade park shows, that we have both been working our socks off to produce, enjoying the evening sun and the responses of the audience. Knowing that its over to the performers now and there’s nothing more we can do (apart from make notes, and make sure we have brought the mosquito spray).” – Pip Nash, designer

Unlike many, Bubble had neither a venue to run nor a tradition of touring into buildings at the time of its 40th anniversary. A series of events were held across the year to look back on and celebrate the enormity of Bubble’s small scale work (carried out in spaces that Bubble ‘made’ or ‘occupied’) with Peth was host. “Brave man, holding his head high rather than drowning under the weight of history!” -Michael Maynard, 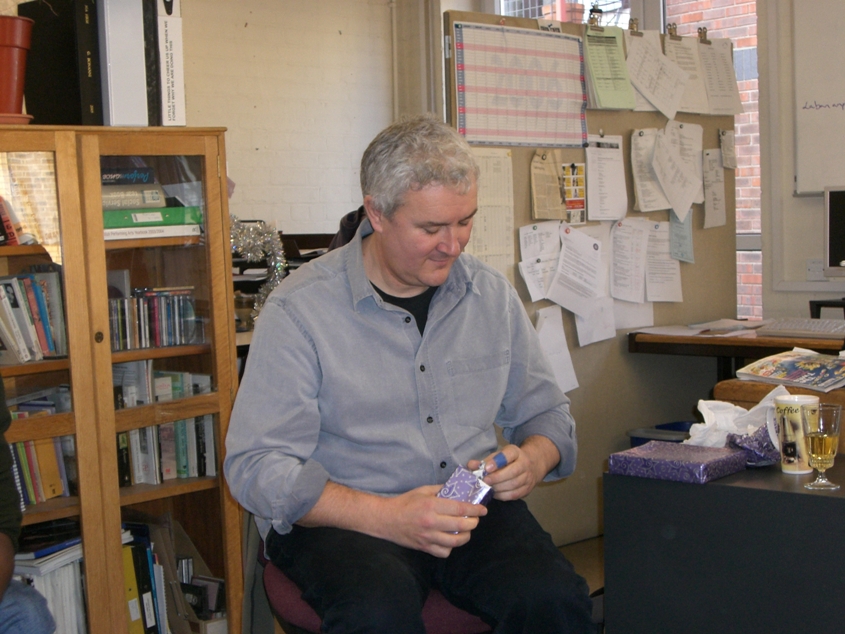 The kitchen area at Bubble has many Peth stories to tell. “I can remember cooking Christmas dinners with Peth for the staff, in the old Bubble kitchen before it was renovated. It was very entertainment for the staff because he and I argued so much over who was cooking what. Gentle bickering about the best roast potatoes and stuff. One year we cooked a bird within a bird within a bird. How did it taste? Well, no one complained.” – Theresa Veith, former staff

FUN & GAMES (OVER THE YEARS)

“My favourite moment of Peth was after a long summer of Gilgamesh, the staff were exhausted but happy and someone suggested we should play cricket – in the office! With a cardboard bat and a rolled up masking tape ball, watching Peth deliver a stationary based spin is a memory I will savour. Good luck buddy!” – Sylvan Baker, former Trustee

“[Going to miss] playing Bananagrams [with Peth]. Most competitive ever!” – Lucy, fundraising manager

“The intergenerational concept is amazing! I’ll never forget escorting the audience with a show in Greenwich Park. And the opportunity Peth gave me to participate in all the shows like Tales from Arabian Nights, After Hiroshima, Primary, and a bit of the [early] Charting the Mayflower project. Overall London Bubble has made my London experience very special and I miss it every day. I wish we had something like this in Holland. I wish Peth well and many thanks to him for everything! So many great moments.” – Dennis, former participant

“I had heard about Peth before I first met him. A production manager that I worked with for a few years told me about these extraordinary outdoor promenade performances that Peth had worked on. So when Bubble did its first promenade performance, I was full of expectations. It was Tales from Arabian Nights and it fully lived up (and more) to what I had been told. It was full of magic and an unforgettable experience.” – Sue Timothy, trustee

“My favourite moment is when Peth taught the adult acting class, it was fun and very unique” – Stephen, young theatre maker/drama group participant 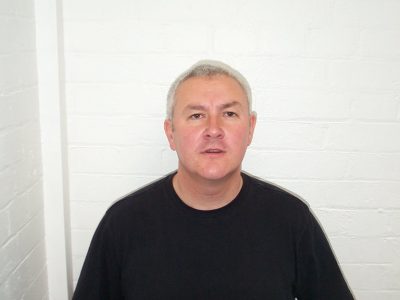 Grandchildren of The Blitz was an inventive retelling of a local story that defines so many experiences of Bermondsey and a pivotal moment for Bubble. The children listening to the stories of the older adults was a magical scene and became the impetus for our now flourishing Creative Elders Programme.

“I remember organising a crew curtain call at the very end of one summer. Getting everyone from different sites all to the end site was a nightmare but we pulled it off and it was very special. Peth once asked if we could move one of the generators even further away from the audience, Tom did as he had been asked but then myself and Nao had to try and relocate it during the show and then realised we were about a foot too short of cable! We sorted it all out with about 30 seconds to spare! We worked hard (thanks Peth) and we played hard. But all our fun was after Peth went home!” – Kate Bosomworth, stage manager

“Peth is responsible for me working in theatre even though I knew nothing about the sector or the art form! Always supporting my curiosity and my ‘I don’t have the answer but happy to experiment’ approach. He’s also responsible for ensuring my kids didn’t inherit my fear of dogs. My daughter often quotes what she learnt about dogs from Peth as they took May on lunch time walks.” – Shipra, former Bubble producer

ULTIMATE THEATRE SCIENCE
“One of my favourite Peth memories is when I realised he was calculating where the Sun would be in every park show scene and factoring that into the scene locations”.- Dan Copeland, participant

Peth continues to lead the current intergenerational project Charting the Mayflower, which will culminate in a large scale performance called The Mayflower Enquiry just as soon as we can manage it in these unprecedented times. Participant Rita Cruise O’Brien has long been a part of this research project and is pleased to continue. “[Peth is] serious about his Mayflower history, he is. And very well read despite all he has had on his plate. Great fun working with him.”