The Parallels of today by Hannah Matthews, images by Harriet Mann 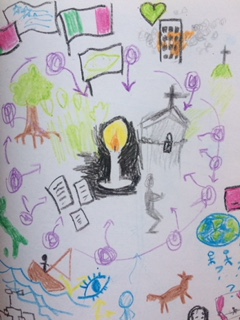 The session on the 14th June commenced with a deep discussion in an attempt to draw ties between The Mayflower Ship and current day affairs. Interestingly we meet on a significant date, a day of commemoration for the 1st years anniversary of the Grenfell Tower fire.

The Grenfell tower has parallels with the Mayflower in terms of abandonment- loss of family, friends, possessions, homes etc. Escapism equally runs rife throughout both events; plenty of people living in Grenfell had escaped as refugees or migrants from across the globe and then further once again after being evacuated from their homes in desperate search of safety. In comparison the people of 17th century England who boarded the Mayflower were also migrating from the political climate and a religion they didn’t particularly agree with, instigated by the patriarch- King James I.

Personally, large comparisons between the loss of homes and companions to families of Grenfell and those of the mayflower can be made. There are currently still people seeking housing from the council. In relation to the mayflower; they too were seeking somewhere safe to stay, albeit willingly. The notion of rebellion and human rights campaigning that now underlines the varying Grenfell activist charities is strong, I dare say at the time of The Mayflower there too would have been an uprising, and in a way, there was…
Other examples offered about connections between the past and the present were given by the group. Harriet mentioned such a thing as ‘Golden Visas’ exist which seemed to shock the majority of our group including myself. Golden visas allow anyone with over a certain number of millions to live in whatever country they choose without so much as a security or financial check over before entering. This shows me that there are people, much alike to the politics of the 1600’s, that a very prominent class divide continues to exist. That there is as still very much a form of financial hierarchy, class status quo and corrupted bureaucracy across the globe for migrants and travellers. People fleeing places of civil war in Africa in search of sanctity and safety on over-crowded boats are declined entry over people who are financially endowed.

To continue the session, we began to get to our feet, moving through the space neutrally, eventually gaining eye contact and silently acknowledging each other. Slowly the space was divided in half, we continued to move about as a group. The spaced halved once more and then again, until eventually we were crammed like cattle into one small area of the room, continuously moving. Finally, we found ourselves quiet, resting on each other and the small floor space we had left. We “slept”, immersed as if on a very cramped boat in a tiny cabin. The experience was incredibly immersive! We then proceeded to raise from a sleep, imagining the time of day and why we might be rising. Maybe we needed the toilet? Were we hungry? Did our children or animals need feeding/watering? By playing this out we truly gained a physical sense of how it felt to be on board a ship. I think I even mentioned I’d felt tired once getting out of the resting position I had been in. 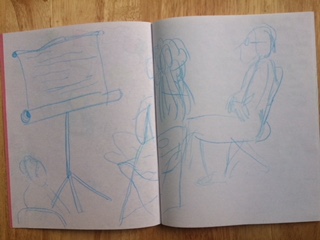 Eventually we began to read through an extract of script. As a collective group of actors, we sat and read together line for line, experimenting with order- first randomly speaking a line then in a semi-circle. It was a fantastic way to play around with voice and intonation. Finally, we began to perform our lines from the cramped boat cabin we had originally found ourselves immersed in. We experimented with staging and blocking and eventually performed the extract of script. Within such a short time it was incredible how far we had come as a group over just one 2hr session devising. It was fantastic and aided the group to further connect and come together, to feel we had collectively achieved something- almost like a real crew on a ship. Interestingly and maybe ironically, the experience of the workshop from start to finish could be compared to the discussions we’d had in the beginning. That although Grenfell and the Mayflower were somewhat negative experiences for people, they further induced a sense of solidarity within the community. Like wise the workshop, although not at all a negative experience by the end of working reasonably hard together as a group experimenting, we too were drawn closer.

The Work of Play